Earlier this month, I had the opportunity to be in New York City to attend a conference for the Bonner Foundation. I, along with two other Mac students, traveled to the campus of Wagner College on Staten Island for the four-day event. Aside from attending workshops and doing professional development, we had the chance to visit Manhattan for two half-days. You can bet that we packed our schedules to the brim! Read on to find out how many places we managed to visit in 13 hours: 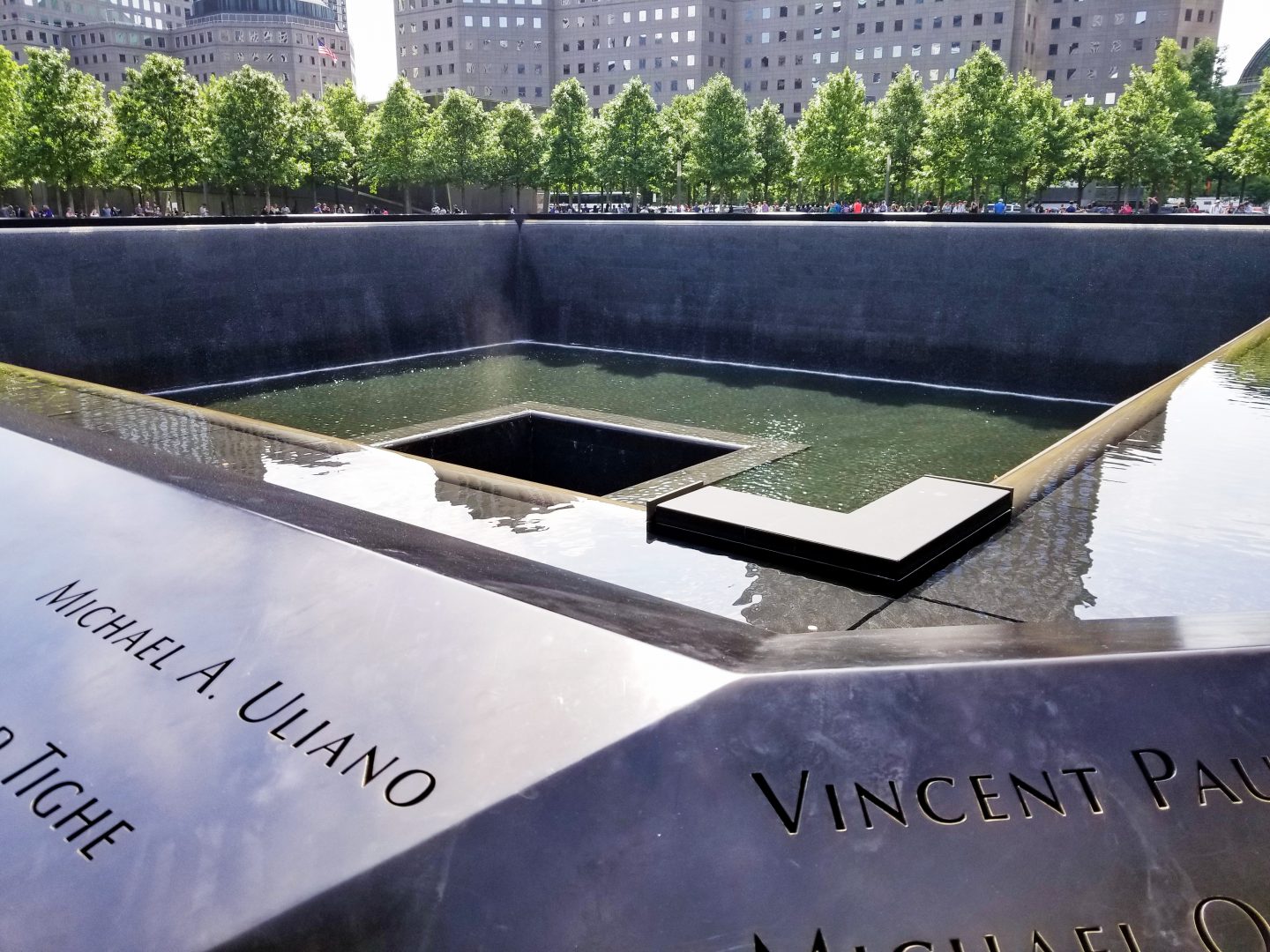 One of the sites that I really wanted to visit was the 9/11 Memorial, dedicated to all of the lives lost in the 2001 attacks on the twin towers. Since I did not immigrate to the United States until five years later, my family and I have no recollection of the day it happened. Many people my age that I speak with are among the youngest generation who remember the 9/11 attacks since they were around 4 or 5 years old.

We stayed here for about 20 minutes or so in silence and walking along the memorial alone. I tried to take in my surroundings and pay my respects to the lives lost. The design of the memorial plaza was very intentional. I noticed that if you concentrate hard enough, noise from the waterfall become deafening, drowning out other city and people noise. Names were etched into the panels so that loved ones can doing rubbings of the etched names on the panel. Memorial employees also place flowers next to names on birthdays. 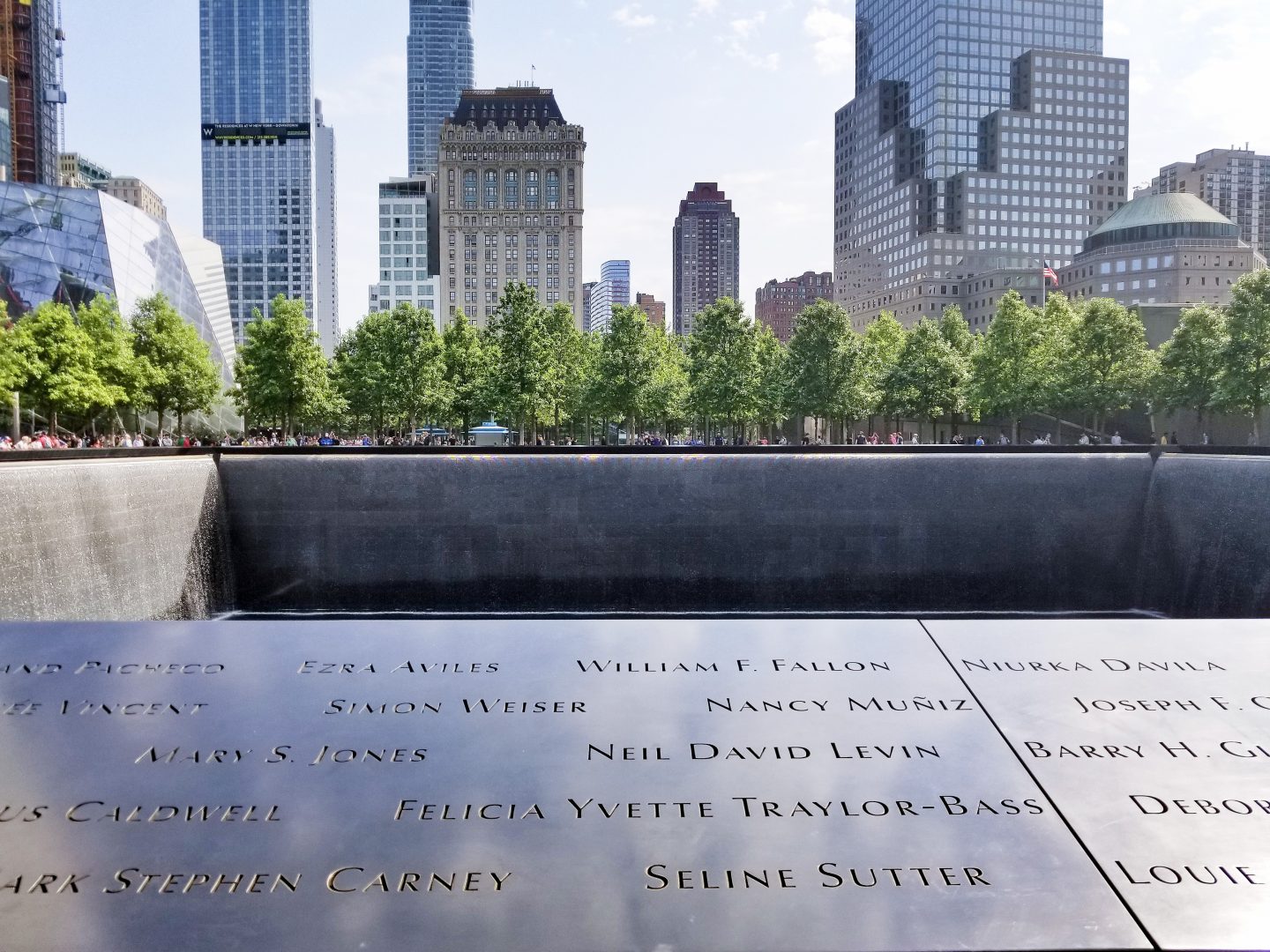 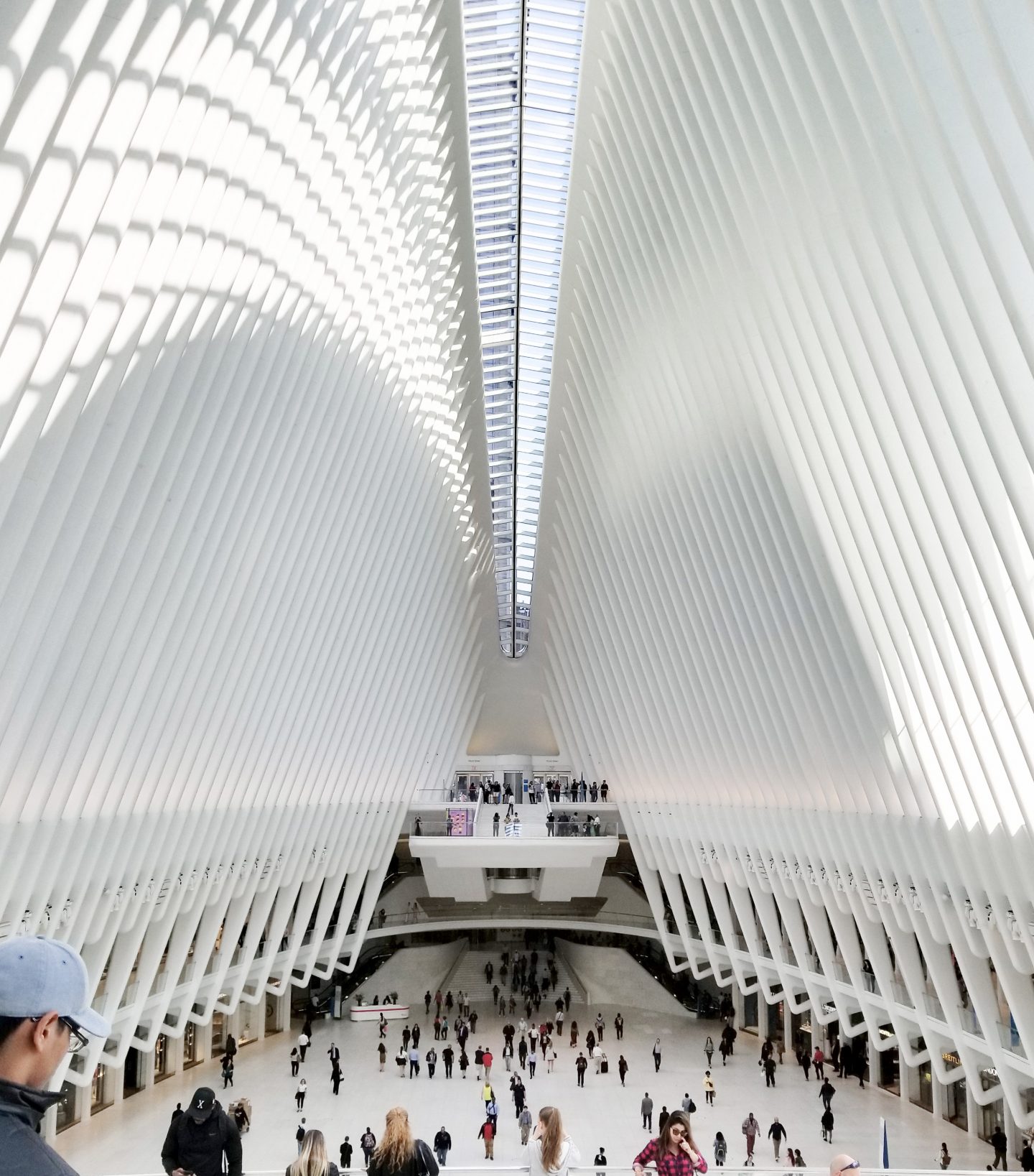 The Westfield World Trade Center, the largest mall in Manhattan, is best known for its oculus. You have probably seen photos of this mall somewhere on Instagram. When I walked around inside, I saw many high-end retail shops and boutiques. There were also a large number of tourists (like me) taking photos. 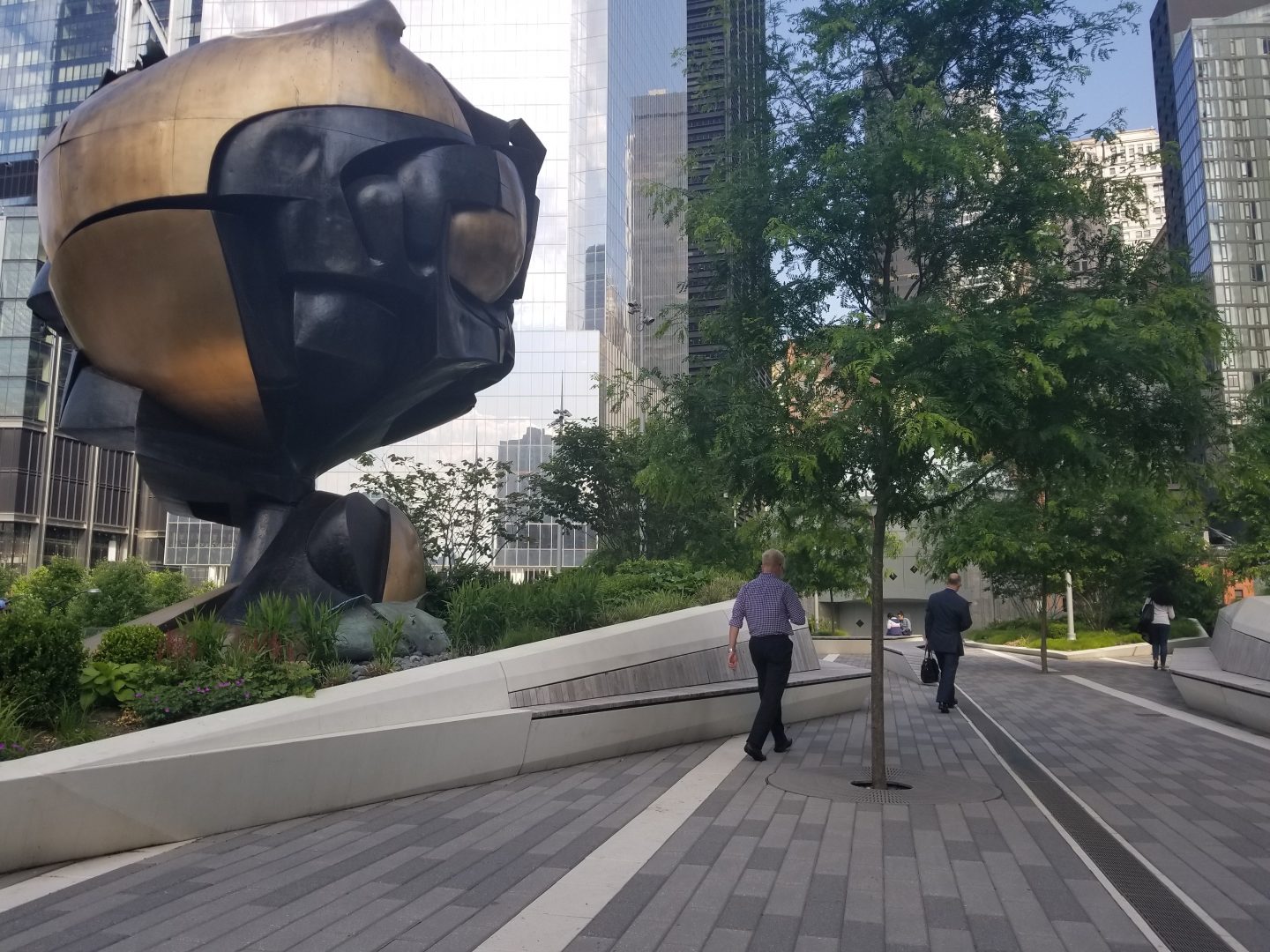 Liberty Park was not a planned stop. Since we had time to kill, we decided to walk around in the area and found this park near the 9/11 Memorial. You can actually see the 9/11 Memorial from the park. From what I observed after people watching for half an hour, Liberty Park serves as an outdoor skyway for people working in office buildings nearby. Not many people stopped to admire the view or the greenery and most people beelined for the other end of the park after getting off work.

The sculpture in the photo has an interesting backstory. All of the metal materials used are actually scraps from the remains of 9/11. Upon closer inspection, I was able to see the dents and wear-and-tear of the metal from the metal’s use before 9/11. 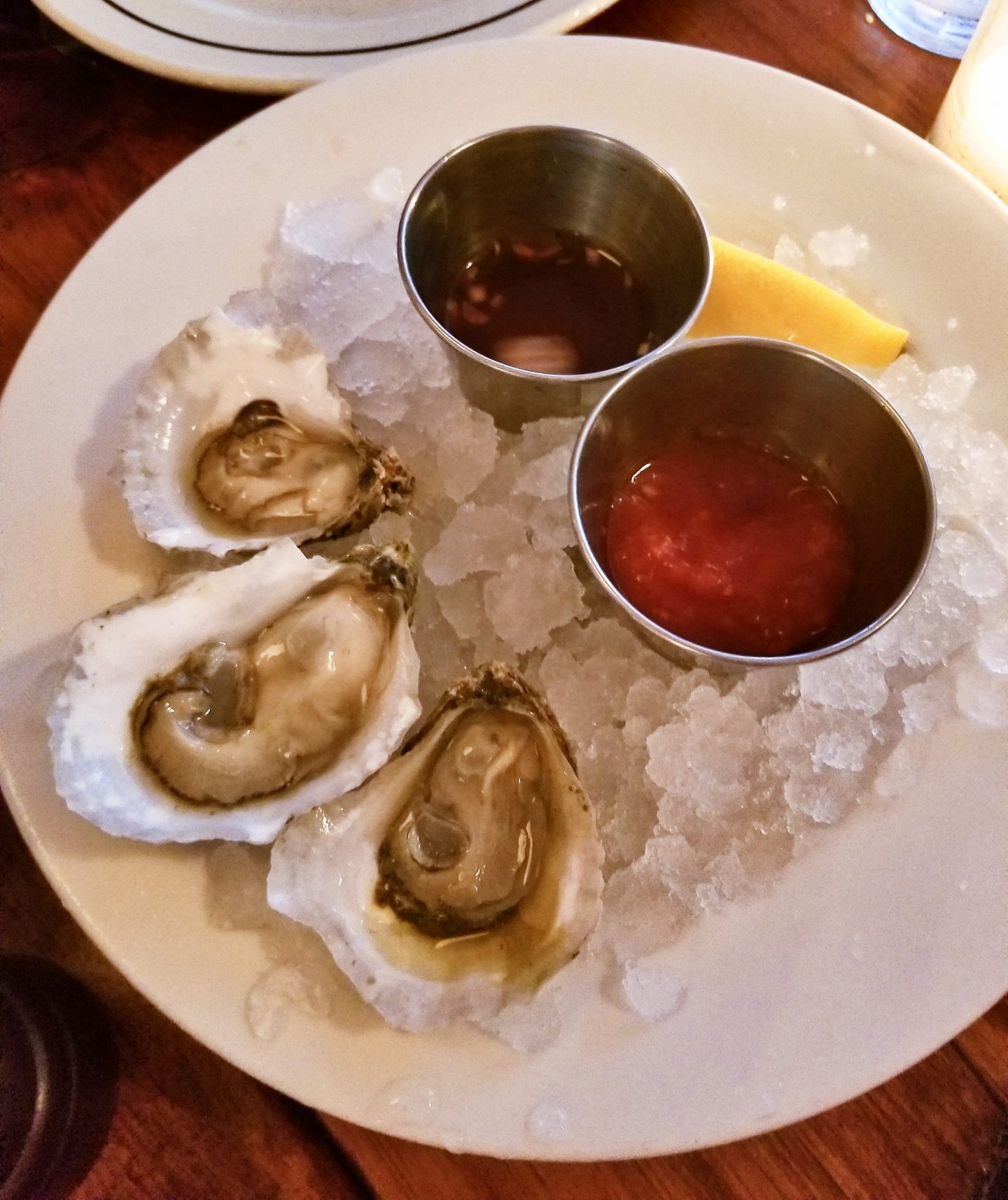 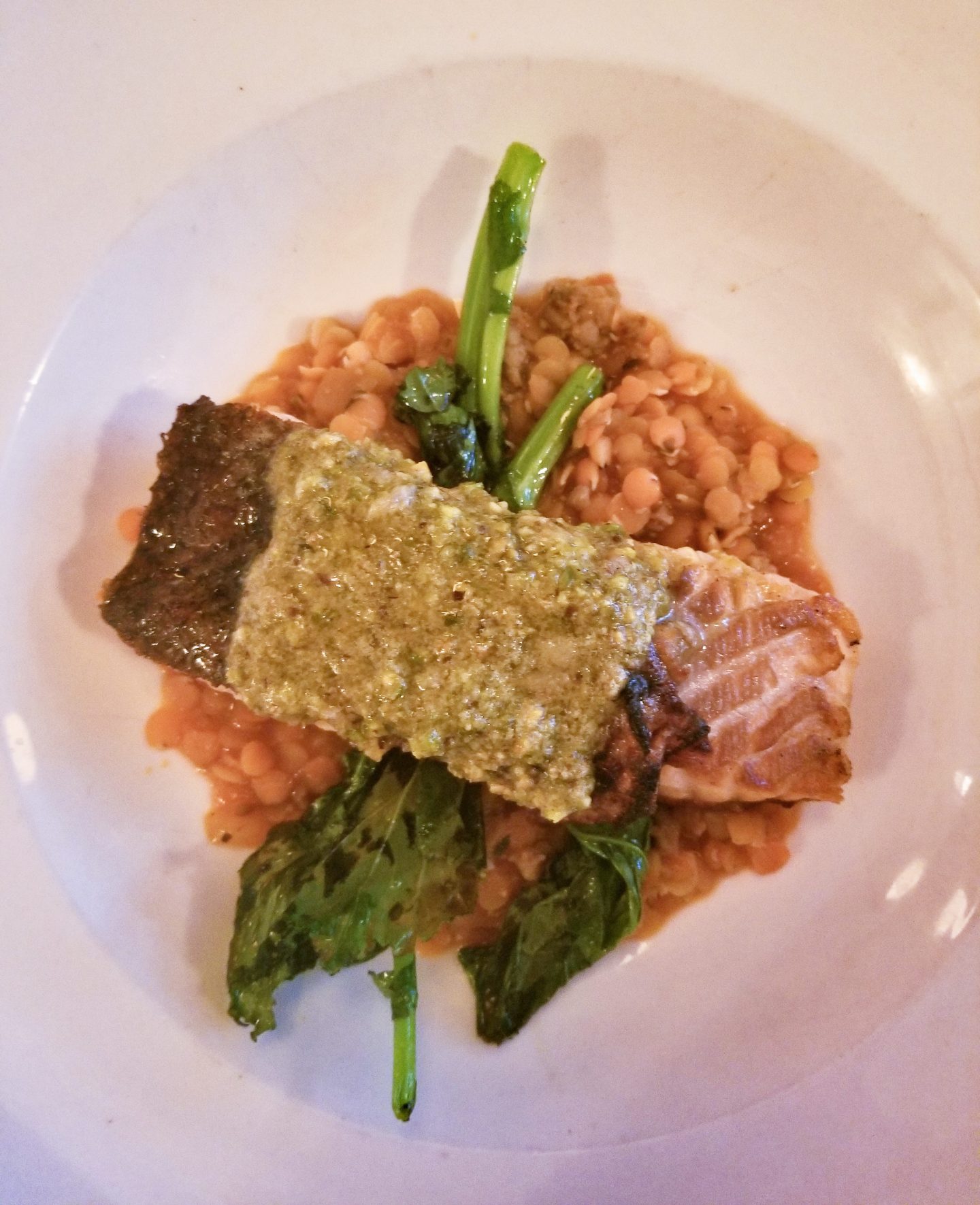 One of us in the group was craving seafood, so we ate at one of three locations of The Mermaid Inn in Manhattan. While the prices were on the higher-end, I would say that they’re also slightly higher due to the “everything is more expensive in NYC” effect. The atmosphere in the restaurant was great and the service was superb. We shared a small plate of oysters and I ordered salmon for myself. I really liked that my salmon was still succulent and flavorful, unlike other restaurants I’ve been to. I headed into the restaurant with no idea of what to expect so I was pleasantly surprised! 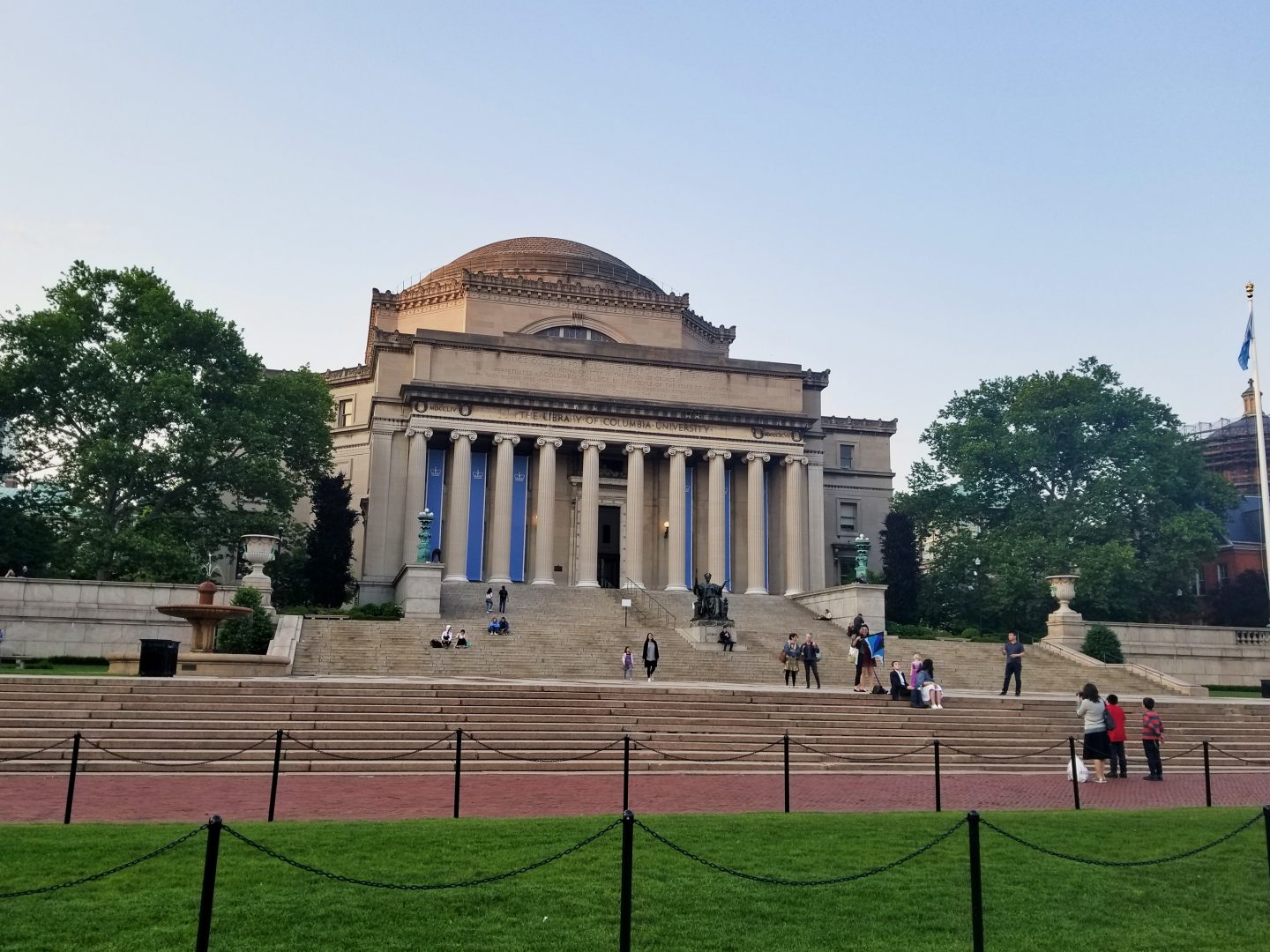 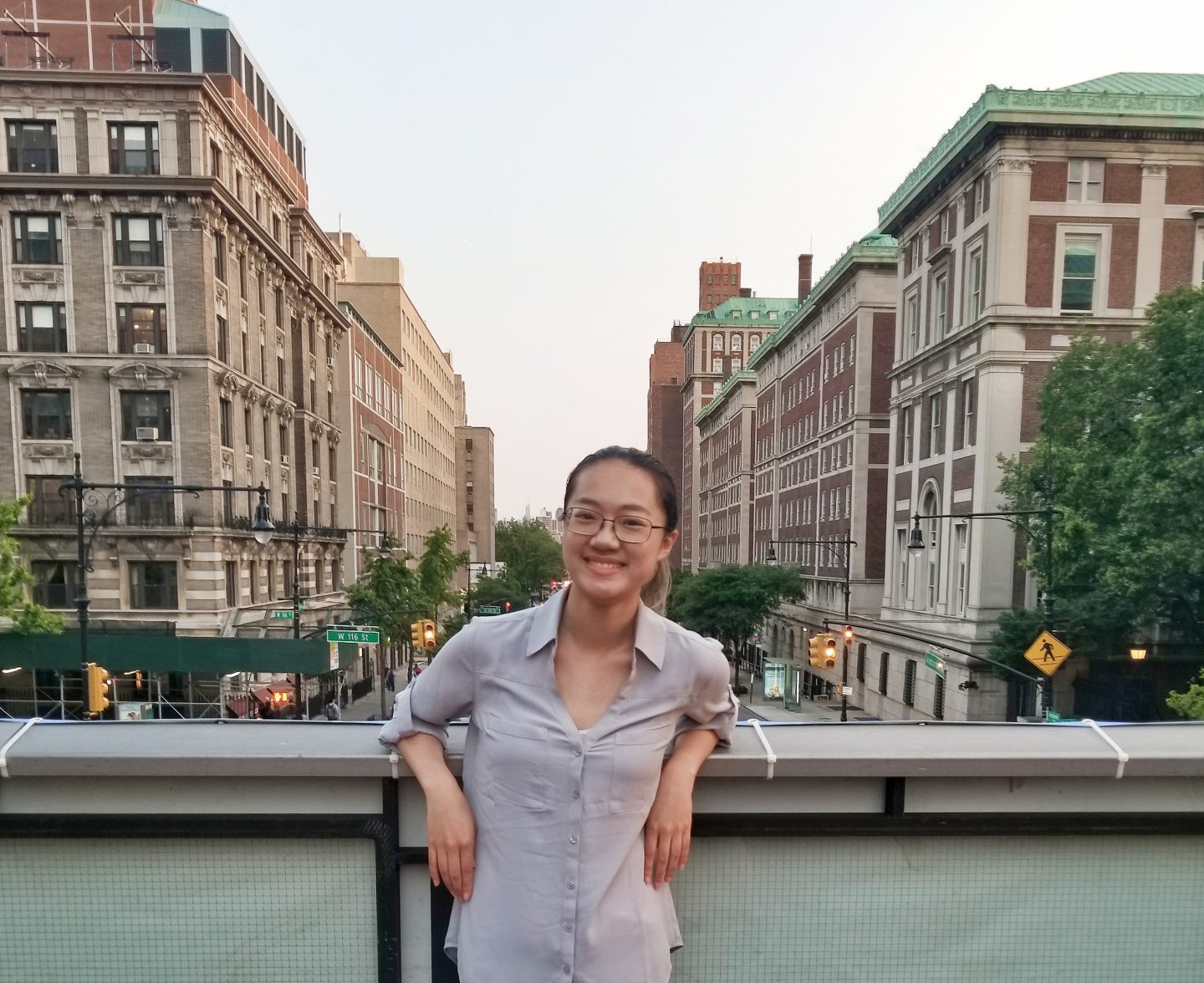 I’m currently in the process of figuring out the application process for graduate school and narrowing down my list (got it down to 10 schools finally – need to halve that now).

Columbia University is one of the schools on my list, so what better opportunity to visit than now? I’ve gotta admit, they have a REALLY pretty campus and the landscaping in the quad is gorgeous. Couple that with a sunset, and I was just in awe of the view. 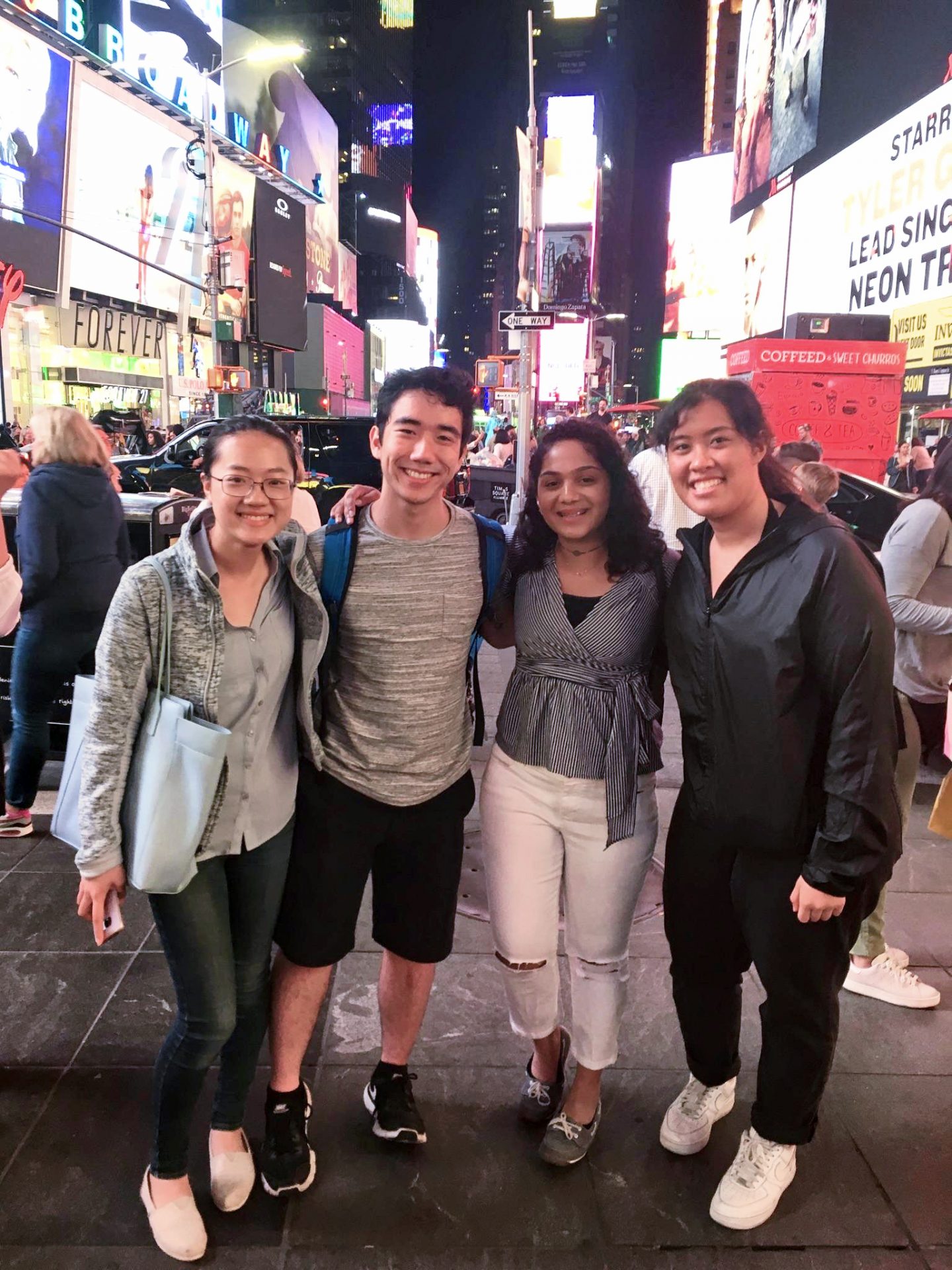 In the stereotypical OMG-I-am-in-NYC fashion, no NYC trip is complete without a visit to the overhyped, overly bright, and over-the-top Times Square.

Times Square reminds me of large, densely-populated cities in Asia. Fast consumption and highly materialistic societies. Brightly-lit billboards everywhere advertising everything imaginable. Times Square is cool, but it definitely gets to be information overload after a bit.

In other news, we saw tour buses with people seated facing the street in a stadium seating format and that was pretty interesting (and odd). 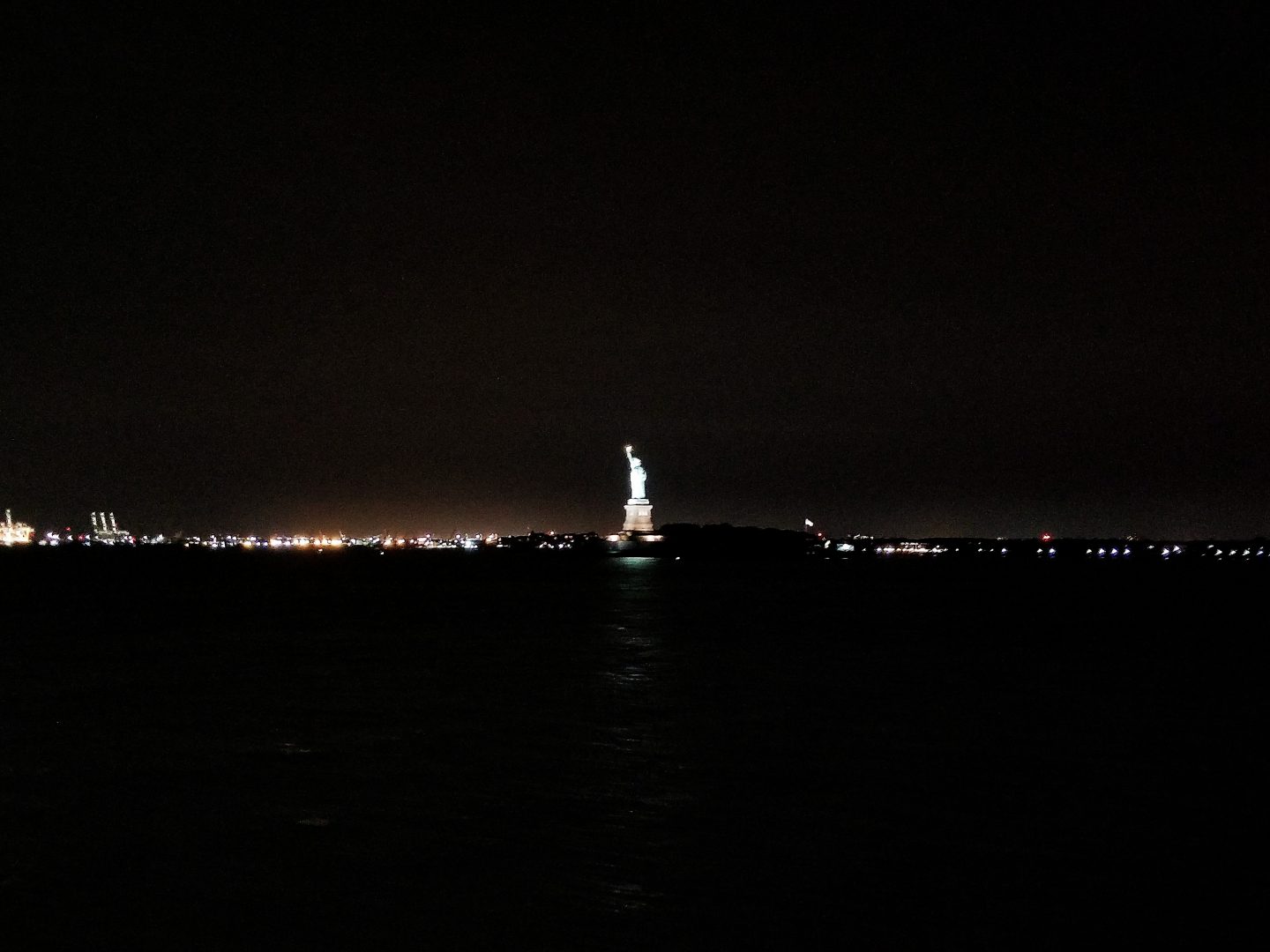 There are not many tourist things that you can do that are free in general unless they’re museums or parks, so the Staten Island Ferry became a cool/practical thing to do as a tourist. Since our conference was on Staten Island, we managed to cross this one off the list pretty easily. It’s fun for people who live in landlocked areas and fun for people (like me!) who like to just stare out and look at the view. My phone camera takes pretty terrible photos at night, but I promise that you do get good views of the Statue of Liberty! 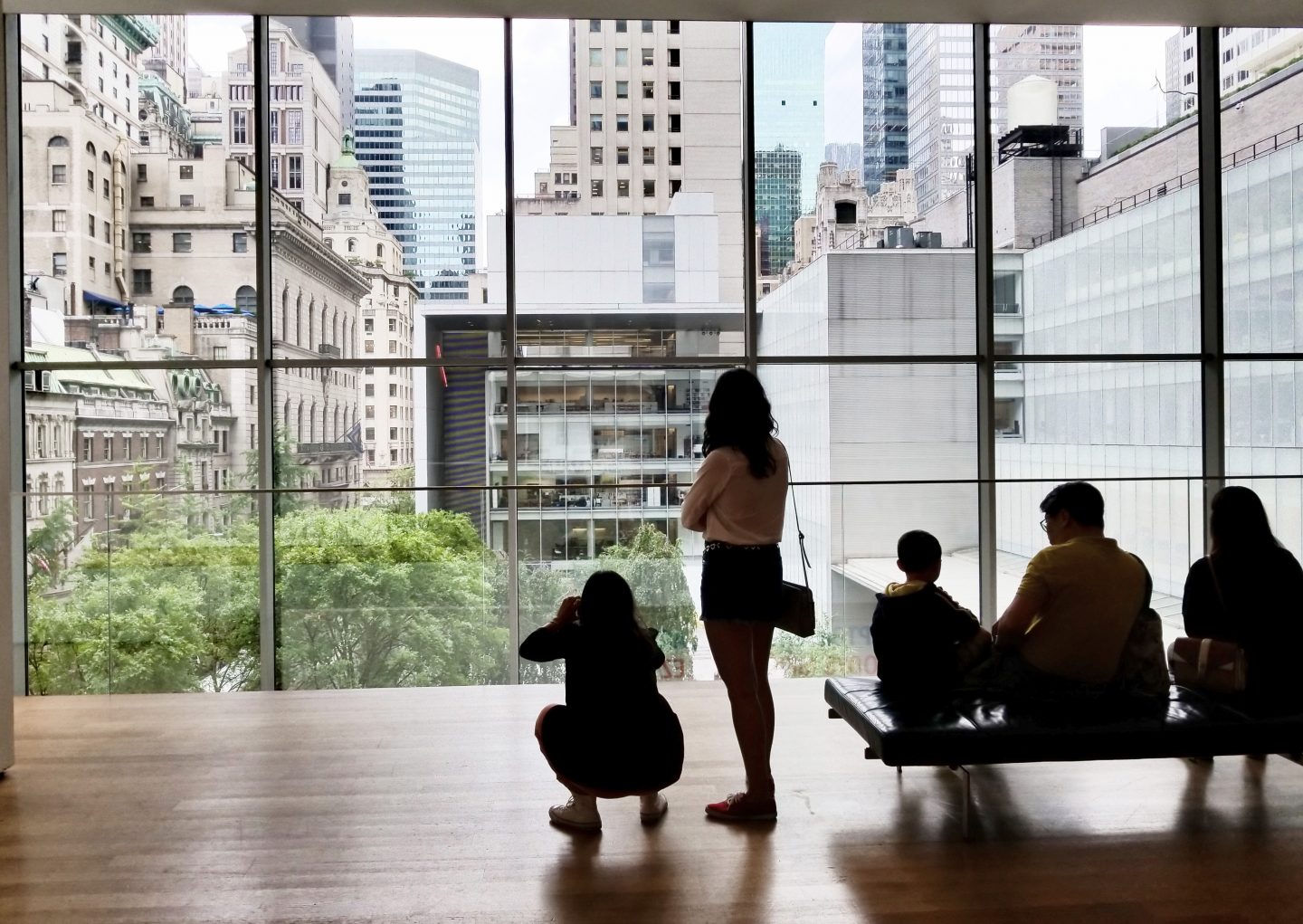 MoMA was definitely a cool experience. I personally love modern art since it feels less of a privileged art form and more relatable to common people. It’s always interesting to see how artists portray the world around them and also add their own artistic flair. I love that some artists know how to be sarcastic or humorous in the work. It is also great to see artists engaging in meaning conversation with politics and the issues that society faces. Here are some of the pieces that I liked from my visit to MoMA: 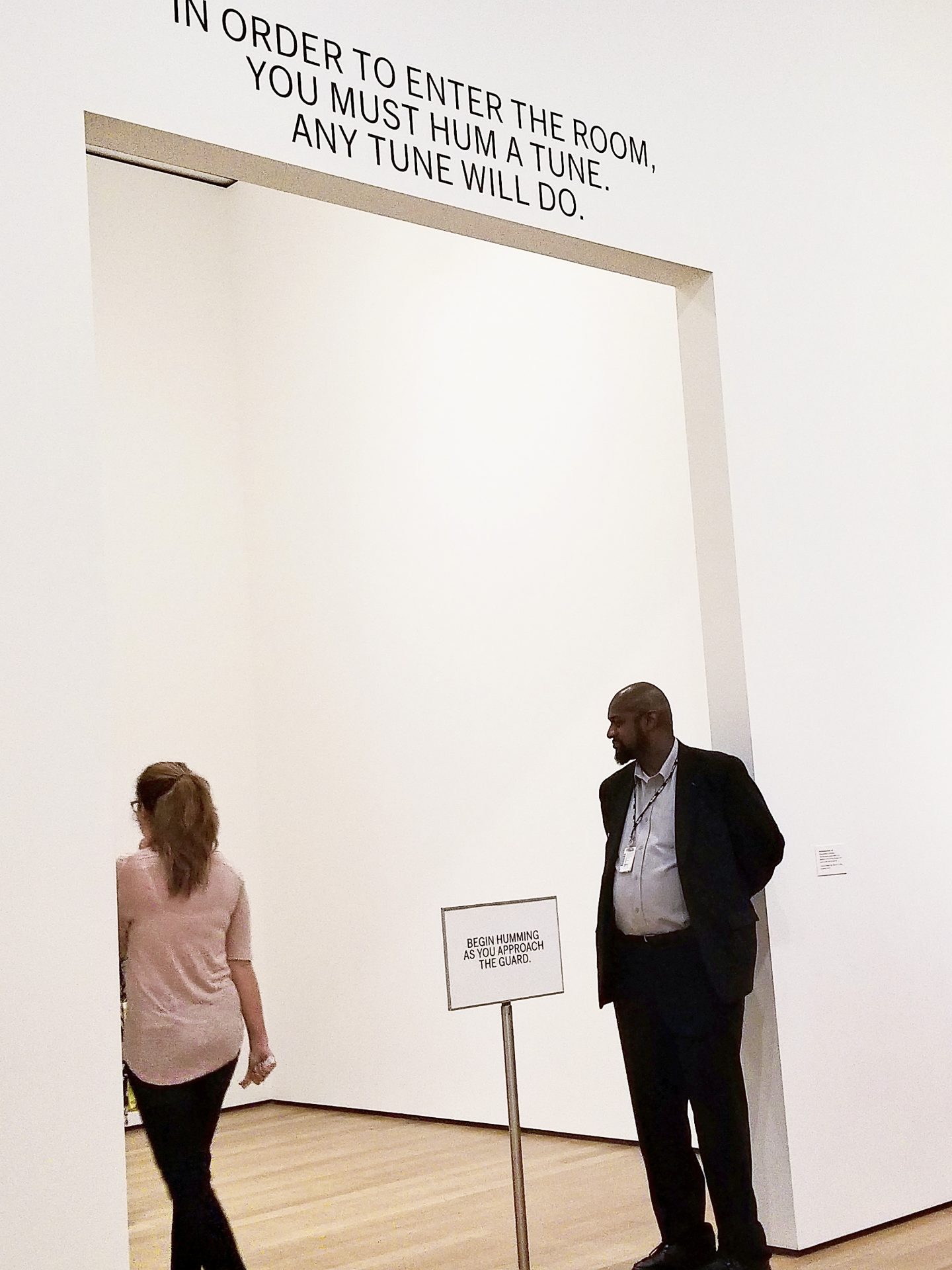 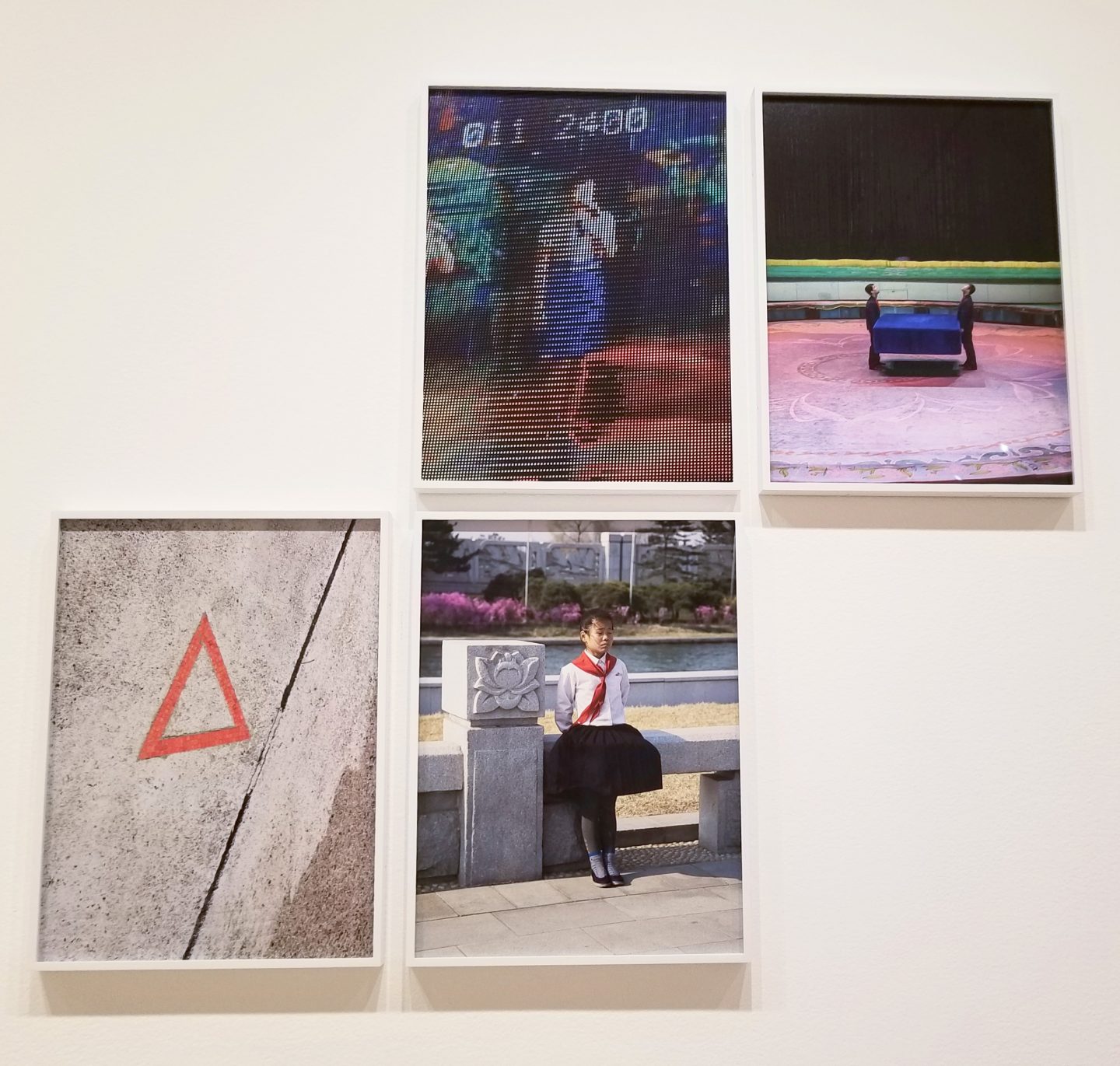 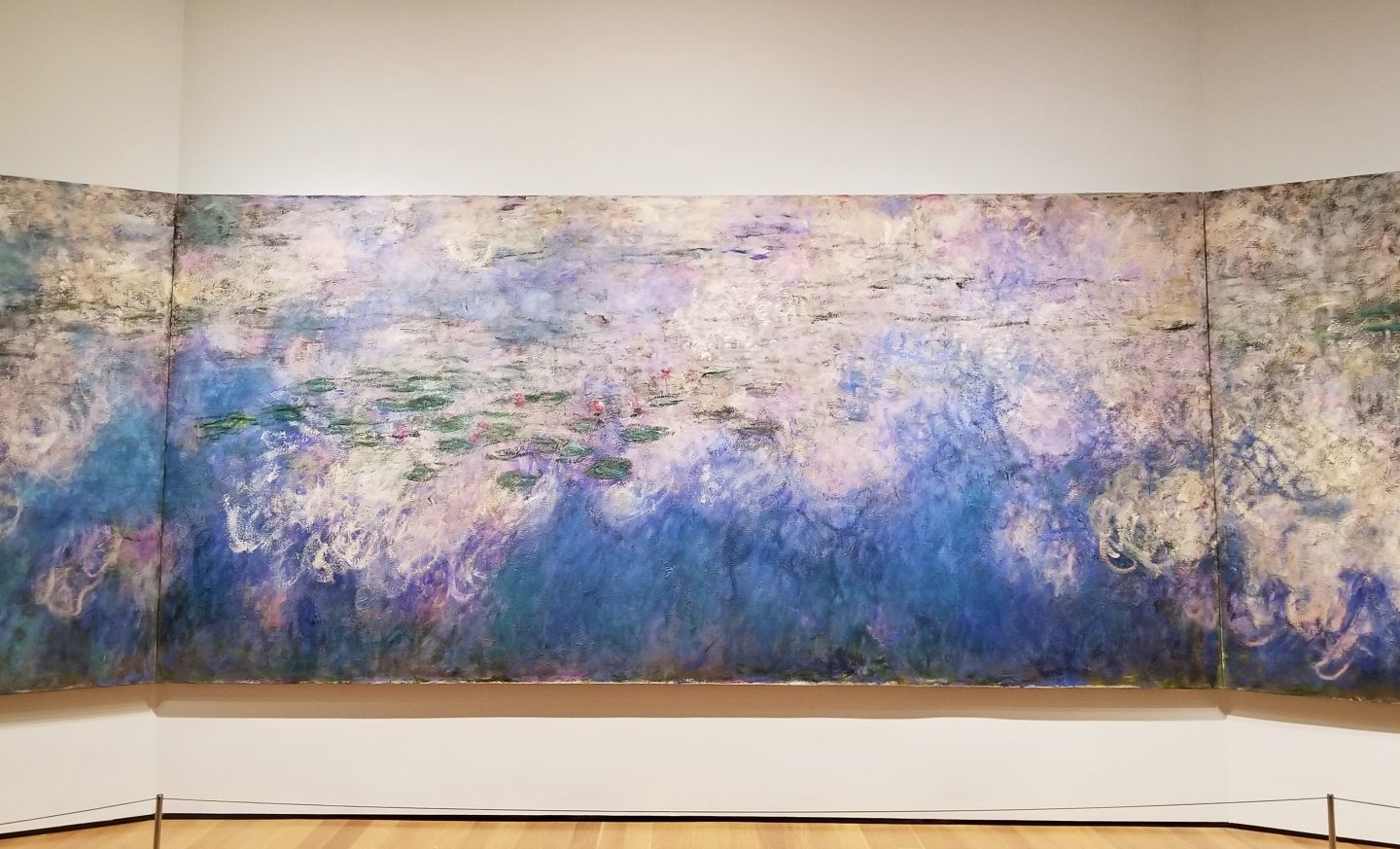 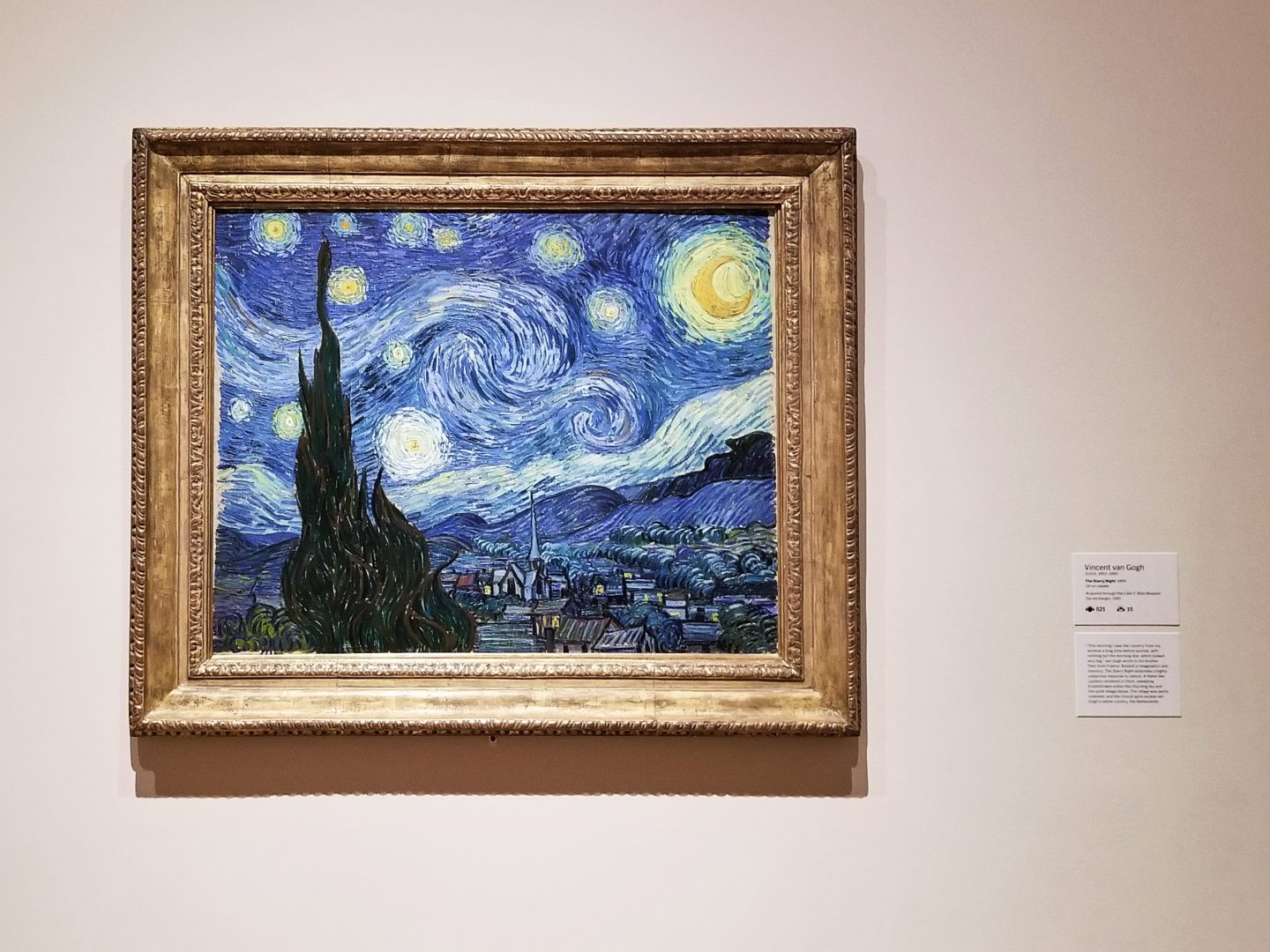 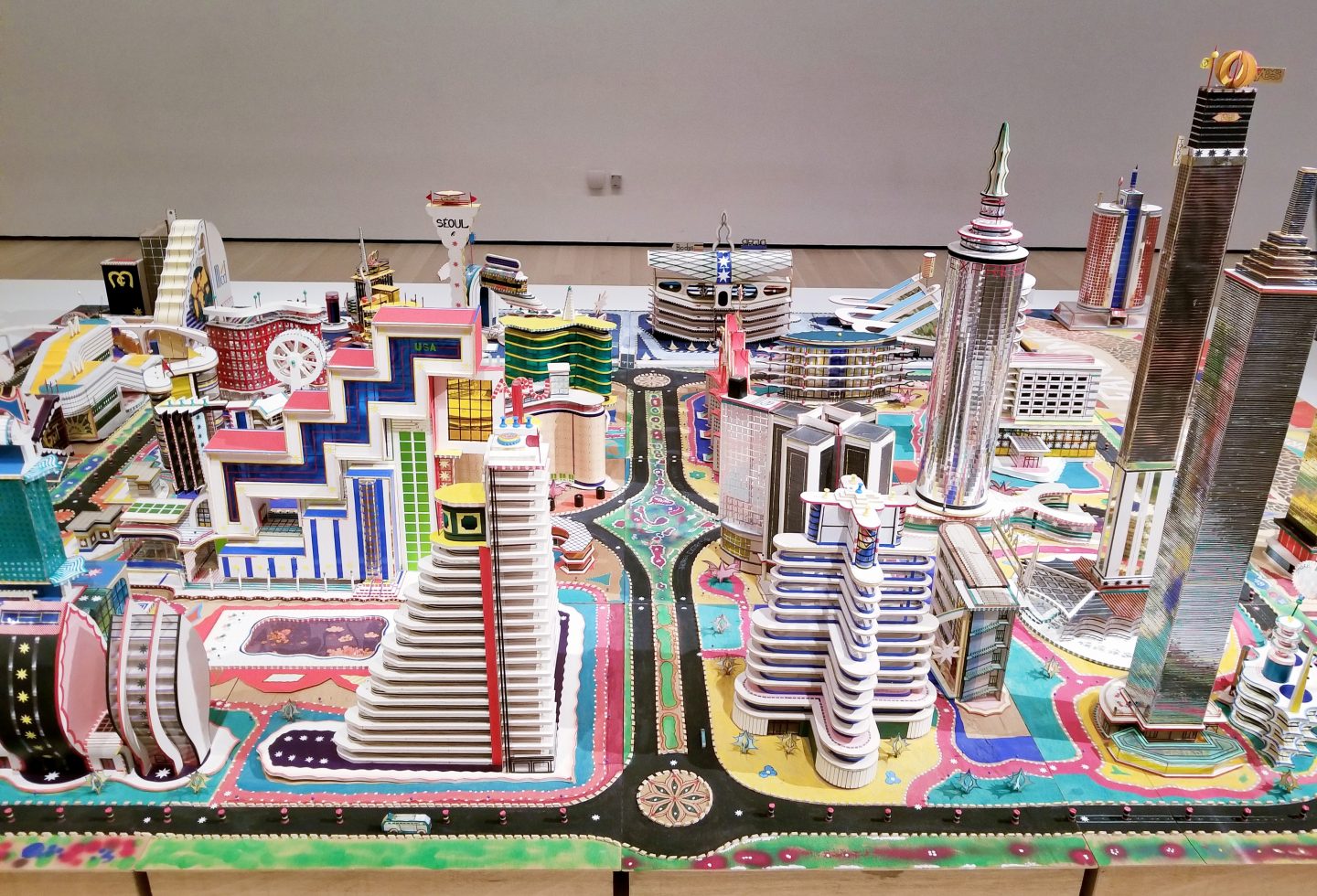 That’s it for my trip to New York City! I am honestly surprised at the number of activities we managed to do in 2 half-day trips to Manhattan. While I can’t say that NYC is my favorite city in the US, I do want to go back and explore the other neighborhoods of Manhattan and the other boroughs of NYC in the future.